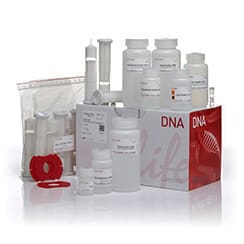 Cloning is the process of creating a recombinant DNA, packing it within a host system and propagating the recombinant DNA within the host. Molecular cloning uses a number of reagents and buffers. Generally, the recombinant DNA is incorporated into a plasmid. For the isolation of plasmid, several buffers are used such as cell lysis buffers, RNases, resuspension solutions etc. In case of plasmid isolation using columns, wash buffers, elution buffers etc. must be used. Further, once the plasmid is isolated, the target DNA and the plasmid must be cut with the same restriction enzymes and ligated together. All these processes require specific buffers to maintain the optimum experimental conditions. Then the recombinant plasmid is inserted into a host. To confirm recombination into the host, several techniques such as plating on IPTG X-gal plates are used. This is a simplified process to select recombinants and screen-out the non-recombinants.