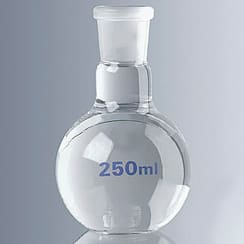 Flat-bottomed flasks are similar to round bottom flasks, the only difference being that they have a flat bottom which enables them to stand upright without any support. Like the other laboratory flasks, they also have wide base and a tapered neck. The neck ends in a standard ground joint or a rimmed opening. The ground joint comes in handy when the flask needs to be attached to other equipments like a distillation unit or a rotary evaporator. The capacity (in mL or L) of the flask is generally inscribed on the body. Usually, flat bottomed flasks only have one neck, unlike round bottomed flasks, which can have multiple necks.

The flat base makes them suitable candidates for situations involving mixing, holding, cooling liquids or containing chemical reactions. It is an indispensable feature for the flask needs to stand on its own, without support or clamps. They are used to heat, cool, dissolve and even boil liquids. The flat base acts as a disadvantage in experiments that involve subjecting the flask to high vacuum, as the sharp curve and straight glass is prone to cracking. In comparison, the spherical base of a round bottom flask is designed to resist fracturing.

BioMall offers an array of flat bottomed flasks based on the capacity and type of neck (long or short).