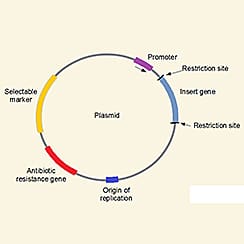 In molecular biology, vectors are defined as DNA molecules which carry a gene of interest. It simply acts as a vehicle which carries the foreign DNA into another cell. Vectors can either be plasmids, viral or artificial in nature. Since vectors are essentially modified when a foreign DNA is added, vectors are known as recombinant DNA. All vectors must contain some essential components. They must have an origin of replication, which allows the foreign DNA to replicate and multiply. A multiple cloning site must be available, where the foreign DNA will be inserted. Another essential component is the selectable marker. The selectable marker essentially codes for a certain protein which helps differentiate between recombinants and non-recombinants. Some commonly used selectable markers include antibiotic resistance genes. Vectors may also contain reporter genes like lacZ alpha, green fluorescent protein etc. Vectors can be categorized into cloning vectors and expression vectors based on their functionality. Expression vectors contain a promoter sequence prior to the inserted gene, which allows the host organism to drive the synthesis of the protein coded by the gene. The strength of the promoter can be manipulated to obtain desired amounts of recombinant protein. Expression vectors are of two types prokaryotic expression vector and eukaryotic expression vector.