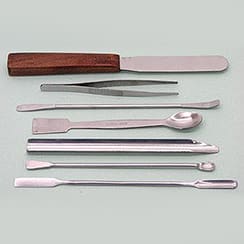 The category of Lab utensils deals with the vital accessories required in a basic lab. Products like tongs, spatulas, Bunsen burners, scoops, forceps, stirring rods, test tube holders and silica triangles on nichrome, fall under this category. Tongs are used to hold or lift objects which cannot be picked up directly with the hand. These are available in different forms based on the application involved. Spatulas (and microspatulas) are generally made from stainless steel, as it is resistant to most materials. They are used as a spoon to scrape or transfer powders or similar substances. They play a pivotal role while weighing such substances. Bunsen burner is a device which is used to produce a single gas open flame for heating, in laboratory settings. Scoops are similar to spatulas, but bigger in size. They are used to ‘scoop’ out large quantities of chemicals from their containers. Forceps can be referred to as miniature tongs. They are hinged instruments used to grasp and hold small objects. A stirring rod (also called a glass rod) is usually used to mix or as the name suggests, stir chemicals or liquids. Test tube holders are tongs specially designed for test tubes. They are ideal in conditions where the test tube cannot be touched directly, for example, when it is hot. ABDOS, Borosil, Heathrow Scientific and Tarsons are some of the top suppliers of these equipments at BioMall.