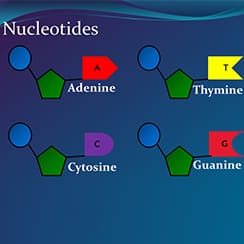 Nucleotides are the monomer or building blocks of the nucleic acids (DNA and RNA). A typical nucleotide consists of a nitrogenous base, a five-carbon sugar (ribose in case of RNA or deoxyribose in case of DNA), and at least one phosphate group.
These nitrogen bases are derivatives of an aromatic heterocyclic organic compound- Purines (adenine (A), guanine (G)) or Pyrimidines (thymine (T), and cytosine (C) or uracil (U)). Given the fundamental role, these nucleotides play in biology their consumption either through dietary sources (like protein-rich foods) or through the synthetic Nucleotide supplements has been shown to have positive health benefits notably to the immune system and also against cancer.
A typical Deoxynucleotide (dNTP) is usually an equimolar solution of ultrapure dATP, dCTP, dGTP and dTTP) which provides ample of free nucleotides for the polymerase to add while the target sequence is being amplified in a PCR reaction. These may also be available separately as dATP or dCTP in solution or freeze-dried form. A dNTP solution is sensitive and is to be stored at a cool temperature and handled with care to avoid degradation.