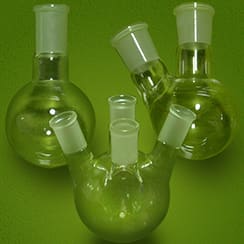 Round bottom flasks, also known as R B flasks or RBFs are made of borosilicate heat resistant glass, which makes them ideal for boiling liquids. Presence of a spherical base makes it impossible for them to stay upright without any support. Round bottom flasks are mainly used for heating liquids and containing chemical reactions. Rotary evaporators, Soxhlet extractors, distillation units and reflux set-ups are some of the equipments where they are used. Electric heating mantles have also been designed in such a way so as to accommodate these flasks.

Some of these flasks have tubular necks ending with standardized ground glass joints (female) which can fit in any similar sized male joints, while others have a long neck with tooled mouth without any joints. The most common size of the mouth (ground glass joint) available is standard taper 24/20. R B flasks are found in vertical/ angled twin, triple, or four neck variants, but it is the single necked ones that are commonly used.  Multiple necked flasks find application in situations where other equipments or probes need to be connected to the flask. For example, one of the necks can be used to insert a thermometer, the other for a stirrer and the third can be plugged with a stopper.

A range of products based on the capacity (5mL to 20 L), type of neck (long or short), number of necks (one, two or three) and the presence of ground glass joints can be purchased for the required applications.