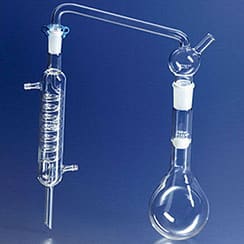 Distillation apparatus is the paraphernalia used for performing the separation the components or substances from a liquid mixture, by making use of selective boiling and condensation. This technique exploits the differences in the boiling points of the components to be separated. Distillation has a wide range of applications like water purification, to produce distilled beverages, petroleum refining, to determine the amount of essential oil, in the manufacture and purification of gases, to name a few. A basic distillation apparatus consists of three main parts: a distillation flask, which is used to heat the sample and volatilize the components, a condenser; which cools the vapour, allowing it to change back to the liquid state, and a collection vessel which collects the condensed vapour. The flask, condenser and collection vessel are generally made from glass. There are different condensers available, based on the type of experiment involved, such as Graham condenser, Freidrichs Condenser. There may be slight variation in the parts of the apparatus, based on the type of distillation involved.