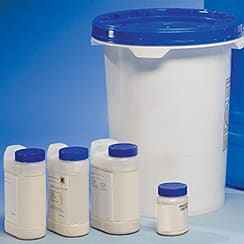 Microbiological media is used to grow microorganisms in laboratory conditions. The growth media can be liquid or solid. In case of solid media, a gelling agent such as agar is added to solidify the medium. The culture media essentially consist of a carbon source, water, salts, an amino acid source such as yeast extract. Microbiological media can be chemically defined or undefined. In case of a defined media, the researcher knows the exact components of the media and also the quantities of the components. An undefined media would consist of several components whose exact quantity or composition is not entirely known. In selective media, certain supplements are added to promote the growth of only some select microorganisms. Differential media is one which has the ability to distinguish between organisms growing on it. For example, blood agar can be used to identify Streptococcus. Enriched media contains added supplements and supports the growth of all types of microbes. Blood agar and chocolate medium are some of the enriched media.