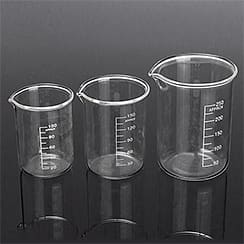 A beaker, common laboratory glassware, is a cylindrical container with flat bottom.a A beaker can be distinguished from a flask by the presence of straight sides instead of the sloping sides. Most of the beakers have a small spout (or "beak") which facilitates pouring. Beakers are available in a wide range of sizes, which vary from one milliliter up to several liters. Standard or "low-form" beakers generally have a height of about 1.4 times the diameter. These are universal and mainly used for various purposes like preparing solutions, decanting supernatant fluids or holding waste fluids prior to disposal or performing simple reactions. Low form beakers are more likely to be used while performing almost any chemical experiment. The height is about twice the diameter in case of Tall-form beakers. Another name for them is Berzelius beakers. They are commonly used for titration. Flat beakers, often called crystallizers since they are used to perform crystallization. They are also used as a vessel in hot-bath heating sometimes. Beakers come in various materials like glass, metals, and plastic. Glass beakers have greater chemical and temperature tolerance and are easier to sterilize. Plastic beakers are safer (little or no breakage), lighter, easier to store, and less costly. Metal beakers are safe, but are opaque and tend to be costly. Glass beakers of different sizes can be availed from Biomall under this category.