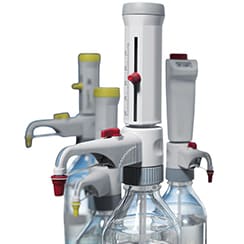 Bottle Top Dispensers are used to dispense aliquots of liquid from large containers. Such dispensers must be capable of reproducible dispensing, without wasting any reagent. Multiple adapters to accommodate a wide range of bottles is an added advantage. Some of the notable features of bottle dispensers include, they dispense most lab reagents including high purity acids and solvents, deliver accurate, precise volumes, increase laboratory safety and resist wear and damage. Diverse factors need to be considered while choosing a suitable bottle top dispenser. They include, volume to be dispensed, nature of liquids to be dispensed and choosing one from manual and digital units. Strong acids and bases, saline solutions, organic solvents, trace metal free liquids, sterile media, etc are some examples of liquids which generally need to be dispensed. Some of them may even have a Re-Circulation Valve which prevents the loss of reagents during purging by re-directing them into the mounted bottle and facilitates bubble free dispensing.

High-quality bottle top dispensers combined with routine calibration of equipment yield higher quality results and sometimes even cut down on reagent loss, the need for repeated experiments due to error, and precious man-hours spent in the lab in the long run. ANM Industries, P’fact and Microlit are some of the leading suppliers offering a wide range of bottle top dispensers at BioMall.