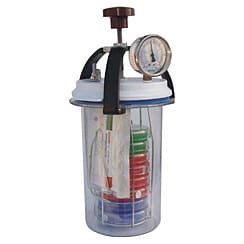 Anaerobic chambers, which are also referred to as anaerobic glove boxes, are atmosphere control units. These are specially designed for situations involving oxygen sensitive materials or product containment needs or general isolation control. McIntosh and Filde's anaerobic jar is commonly used to create an anaerobic environment. This is done by replacing some of the air present in the jar, with hydrogen or a mixture of carbon dioxide and hydrogen. Palladium is a preferred catalyst used in these jars. The culture media along with an indicator system is placed in the jar. The indicator system aids in keeping a check on the environment in the jar. Gas-pak is another method used to produce an anaerobic environment. It is used to culture bacteria which die or fail to grow in presence of oxygen (anaerobes). This technique is a much simpler technique than the McIntosh and Filde's anaerobic jar where gas needs to be pumped in and out. Gas-paks are commercially available in the form of disposable sachets which contain a dry powder or pellet. These pellets, when mixed with water and kept in an appropriately sized airtight jar, produce an atmosphere free of elemental oxygen gas. These products are widely used to produce an anaerobic culture in microbiology. Sodium borohydride, sodium bicarbonate, citric acid, and cobalt chloride are some of the components present in a Gas-pak. Palladium pouches, a variety of anaerobic systems and Gas-paks can be purchased online on Biomall at the best offer price.